Before coming on this trip, I knew God had something for me in Haiti. From a practical lens to a spiritual lens, God was clearly making a way for me to get to this country. Yet, I didn’t know what to really expect going into the trip. A couple weeks before leaving for Haiti, we had our mission trip meeting,  and at one-point Pastor Sonia asked everyone in the room what they were expecting from the trip. I noticed many people in the room had similar expectations, but when it came to me, the only honest answer I could come up with was “for God to wreck me.” The last time I said those words was when I first got saved in middle school. I didn’t know what those words really entailed until the moment I stepped off the plane in Haiti.

When arriving in Haiti I was super excited to jump straight into ministry. My energy was high and my passion became stronger. When it finally reached the day  in which our team started to head out to the village we were to serve the next couple of days, I began to feel a little under the weather. Throughout the day, painting classrooms and playing with kids, my body became fatigue and my throat started to burn. I tried my best to see God move throughout the day, but by the end of it, the little cough I had in the morning became a fever at night.

Have you ever felt  like you just missed an opportunity with God that you’ll never get back?  That question became my main focus the whole day carrying into the night, “did I miss it?” 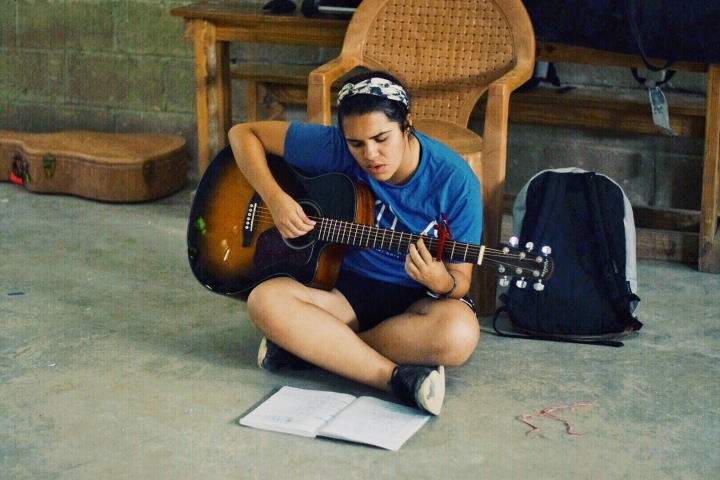 Usually after a long day of ministering in the village of Vauldriel we would gather up at the end of the night and have some devotional time. I was given the opportunity to lead worship during those times. However, the night I had the fever was very discouraging. Prior to the trip I knew that God definitely would use me with my talent, but when my voice was taken away from me, I’d never felt so physically and spiritually defeated. Graciously, Pastor Sonia saw the condition I was in and decided to plug in a phone to a speaker and have us seek God. As the night began, I found a corner and the only thing I could do was breakdown in tears before the Lord. I was so mad that my body was doing this to me, there was nothing left for me to offer. There were no words leaving my lips, but tears filled with hunger and desperation for God. Then it occurred to me that my flesh was dead, so I think it was safe to say it was time for the Spirit to take over. Immediately in that clip of time, He began to reveal himself to me like never before. I was filled with his love and found a new identity in Him. There were past hurts I thought I had surrendered  that he FULLY restored. I realized that when I stop puzzling my mess together, God was able to come in and begin to wreck me with his love.

I believe God was trying to show me that in the lowest of lows, was to let go and let Him be God. I guess sometimes as Christians we feel the need to have this “set up” or “look” as a certain way to hear and see God move profoundly in our life. Sometimes, without even realizing, we get ourselves in the way and limit God to present himself anyway he wants.

After receiving that revelation, during the rest of my days in Haiti, I allowed God to show up in every moment from conversations at the missionary’s house, to painting classrooms, to playing with kids at the village. Within those moments more revelation occurred, breakthrough was met, encouragement was instilled, and most importantly souls were won.

I learned during this trip that no matter where I go, He will never leave me, and He will never forget about me. When I feel lost or unfamiliar, God reminds me that He will never change. His love is the same here at home in Orlando or in a living room in Haiti. With every new location He reminded me of the same, constant, powerful love He has for every person as well. It will never hinder or shy away based off an individual. For the child who has nothing in Haiti, to the person like you and me who has everything; He will always present himself the same. With everything or nothing I found out God’s love will show up the same.